[This review contains spoilers about the film]

There’s a cliché saying that goes “The eyes are the windows to the soul.” That by looking into the eyes of a person, might reveal a glimpse of the inner mechanisms of such heart and thereby, gains insight into the soul. If such saying implies truth, then surely, we must know where one’s heart lies from how they see the world alone?

In Bong Joon-Ho’s Parasite, we open to a large glass window of a semi-apartment basement inhabited by the Kim family. Kim Ki-teak (played by Song Kang-ho), the breadwinner and a recently unemployed driver, is folding pizza boxes along with his wife, Choong-sook (Chang Hyae-jin) and their children: Ki-woo (Choi Woo-shik) and Ki-jeong (Park So-dam). They leech wi-fi off their neighbors and find better strategies to fold more pizza boxes on YouTube. One night, Ki-woo is invited by his upper-class friend, Min-Hyuk to apply as an English tutor to the daughter of the wealthy Park family. As Min-Hyuk is leaving to study abroad, he encourages Ki-woo with the tempting salary amount—to which Ki-woo accepts. Min-Hyuk also leaves the family with a parting gift: A large rock that is said to bring wealth and good luck. 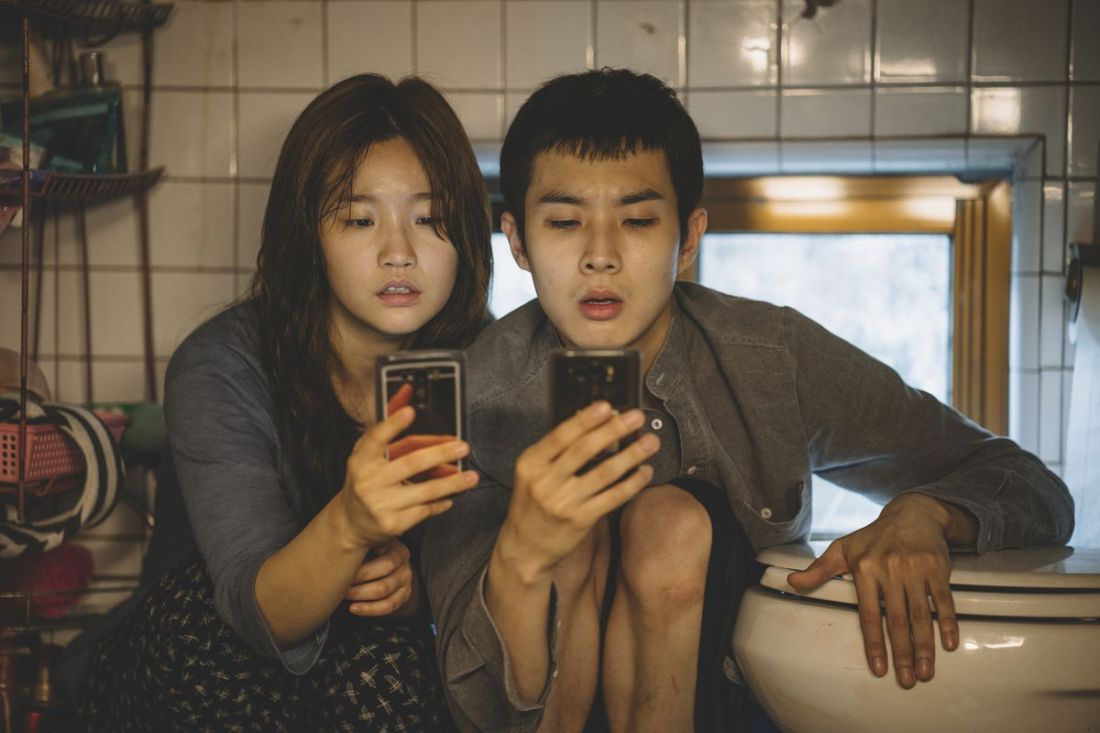 Upon introducing himself to the Park family, Ki-woo is immediately accepted once he makes a good impression under the eyes of the seemingly simple and cautiously nice, Mrs. Park. A plan begins to hatch as soon as he sees the framed artworks of the youngest member, Da-song, hung up proudly in the wall. Da-song, a clairvoyant fragile child, is in apparent need of an art teacher. From then on, Ki-woo suggests the skills of “Jessica” (Ki-jeong), a friend of his cousin who studied in an art school in America. Thus, begins the heist of Ki-teak’s family into sneaking themselves into the Park household.

Parasite starts off promising, enough to wield laughter with the sarcasm and wit of a family, strategizing their ways to survive against an unsympathizing environment. It’s a common theme in a lot of stories about the urban poor. This desperate need to blend in with an environment ruled and perpetuated by the upper class in exchange for survival makes it sinister. Yet, this becomes a contest for the lower class to gamble on to, because there is no viable option but to scramble: tooth and claw.

The Parks aren’t necessarily bad people, as Ki-teak remarks, they’re “ironed nice”. They’re nice because they don’t have to fight for their survival and necessities. They’re nice because they live on the greener side of the line, nice because they can afford to make something out of its possibilities. Meanwhile, the Kim family works their way into blending in, but in order to do that, they must also pay with their labors to match their faux personas. It’s not enough still, as Da-song innocently comments on the similarities of Kim Ki-teak and Choong-sook’s (the new housekeeper) smell.

Bong Joon-ho’s directing and Yang Jin-mo’s editing is seamless as they show us the differences of the two families from the polar spectrums of the social class: the compact suffocating basement of the Kim family vs the spacious empty halls of the Park family. It’s worth noting that the windows of both families allow us to see what they see: the drunkards pissing now and then vs the luscious empty backyard of the Park family. Its screenplay weaves us into championing for this family who is desperate for stability with their clever words and strategic guises shifting into a sinister tone once things kick off by the second act.

This is where the halls begin to loom ominously, as we find out that the basement opens to another set of halls, albeit this one darker and suffocating. Unbeknownst to the Park family, their previous housekeeper: Moon-kwang returns to show that she has been hiding her husband, Geun-sae in a bunker, underneath the halls of the house. Geun-sae has been hiding from loan sharks, while Moon-kwang steals food from the Parks for him. A confrontation ensues between the two families once their guises are revealed. It’s an interesting rivalry: two families benefitting from the Parks’ wealth, ready to tear the other apart. A rivalry that requires domination of another and that to maintain one’s gained position in the setting; another must be pulled off. It’s a never-ending cycle overlooked by the wealthy because for them: anybody is replaceable.

The tension never leaves as the Parks unexpected return only fuels the two families’ position. It’s a bloody confrontation which ends with a fatal concussion for Moon-kwang and a tied-up Geun-sae as the Kim family hides in the empty spaces of the house—like ghosts.

The moment the storm starts its havoc, the tone further shifts into an escapist thrill of a tragedy. The Kim family flees like ghosts and return to their already flooded home. Salvaging whatever they can and fleeing—but not before Ki-jeong slips for a quick smoke on top of a spewing toilet. It’s a shot of futile resignation as she spews out smoke.

By the third act, there is anger. It is palpable in the aftermath of the storm. You can feel it through the seamless contrast of the two family’s situation: the aggressive fight for necessities by the homeless vs the Parks’ comfortable source of it. “Lemons into lemonade!” Mrs. Park ignorantly says while she pinches her nose from Mr. Kim’s rising stench.

This ‘lemons into lemonade’ mindset that has been fed to us manifest in the previous scene when Ki-woo holds on to the lucky rock, stubbornly believing in the dream they had already invested in. Meanwhile, Ki-teak’s despair over their situation sinks in. Whatever plans they dream and conjure is always preyed upon by the universe. And it is evident once the situation of the other family looms over their heads.

Once the anger sinks in, the violent frenzy of their situation starts. Bong Joon-ho doesn’t hold back on the bloody frantic climax of the film. He lets the characters go forth, releasing themselves like caged animals ready to bite out of hunger and captive. It’s a mess of a tragedy and one that enables us to see who the real Parasite is, amidst the blood bath: As Gen-suek hacks into the crowd to take revenge into the Kim family, Mr. Park pinches his nose from the scent of them all, as he takes the keys to bring his fainted son to the hospital. Ki-taek sees it unfold with his daughter’s blood in his hands and in a moment of clarity releases himself from the bounds of his careful persona into a calm fury. He stabs Mr. Park directly in the heart and flees back into the hidden bunker.

It’s so easy to see why this film had won the Palme d’Or. Bong Joon-ho has mastered his twist and turns of a story crafted evenly that the shift doesn’t feel awkward at all. It is seamless, as well as the editing. Hong Kyung-pyo’s cinematography is pristine in itself: the compactness of the bunker halls is rampant even up until the end and is enough to hold you to the edge of your seat.

And while Bong Joon-ho shows us what window offers the greener pasture we like to dream of, the film also limits his anger into a futile attempt of a resolution: Ki-woo’s letter about going back to study at university and pursuing a safer course in life towards stability. He writes to his hiding father about purchasing the empty house in the future like a dream, but the suffocating window of the basement only reminds us that it isn’t likely. There’s no anger left in it anymore, but some mere resignation to this parasitic cycle. If that’s the eye where the soul of this film shows us, then surely there must be something to break that glass window apart? But for now, maybe we’ll find content smoking on top of our spewing toilets.

[Parasite is exclusively showing in SM Cinemas//Images from IMDB]

1 thought on “‘Parasite’: The Window Towards Greener Pastures”