Maybe I just have too much faith in hugot culture, but I thought LSS would be a blockbuster hit. It has become almost a rite of passage for young Filipinos to cry to at least one Ben&Ben song (I’ve personally bawled at two), so having a feature film to commemorate our collective catharsis, scored by the band’s comforting folk pop, was a cause for excitement.

The film opens with the two leads living their separate lives, bound only by the common tune they both hummed. Early on we see that music is embedded into the bloodstream of the film, acting like a character in itself—it is, after all, what brings the two lovers together in the first place. Music is a love language, and a universal one at that.

But as the movie goes on we realize music is not just for lovers, but dreamers; LSS is a story of love, but not just romantic love, but love for a passion, for family, for a band, for their music. Hugot culture is alive and well—LSS just isn’t a hugot movie.

The first half is electrifying: we see Zak (Khalil Ramos) and Sarah (Gabbi Garcia) cross paths, exchanging nothing but names and a blank CD, before going back to traversing on their own: the former perpetually in love with a best friend that will never love him back, the latter chasing a dream she keeps having to put aside to send her brother to school. Orbiting the same music scene, they keep almost reuniting, reaching their respective all-time lows before finally finding their way back to each other in a scene that’s one of the best of the year. 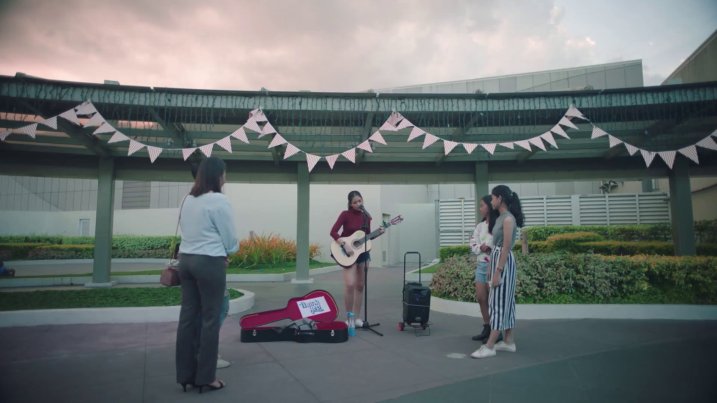 From that point, however, the magic of LSS falls flat. Ramos and Garcia are charming presences, but their chemistry doesn’t exude the palpability warranted by their relationship being the emotional core of the film. While their personal narratives were in no way set aside when they got together, the former, having carried the weight of the film’s first half, was what still caught my attention, deeming the latter an unnecessary layer that distracted from their more interesting individual odysseys. Frankly, after their chance re-encounter midway, I was just waiting for the movie to be over.

What kept the second half afloat was the supporting cast: Elijah Canlas, a friendly face from this year’s Cinemalaya entry Edward, is given more to do here as Sarah’s little brother, switching from aloof and boyish offstage to swank and cool onstage. PPP Best Supporting Actress Tuesday Vargas steals the show as Zak’s mom, adopting an idiolect that feels contemporary but authentic, whose humor is rooted in her fear of vulnerability—her arc’s crescendo breathed life into an otherwise unrewarding and draggy third act.

Still, there is much to be applauded in a love story whose ultimate message is that love shouldn’t be the ultimate end. It can be so easy to romanticize the idea of losing yourself in the name of true love, but LSS reminds us that love, while big and grand and broad and seemingly encompassing, is not the be-all and end-all of all things. I went into the movie thinking, “Sana all may jowa,” and left it saying, “Sana all matupad ang pangarap.”