In Andoy Ranay’s Open, we hear our main characters Rome and Ethan (Arci Muñoz and JC Santos) argue and consider trying out for an open relationship. It’s a familiar point of a relationship and it seems we are intruders in the room as we rewind back to what lead us to it.

Rome and Ethan have been together for 14 years. They are high school sweethearts who have leaned on each other, who have been each other’s rocks and supporters. This is evident in their morning routine, a picture-perfect vignette of domesticity as we watch them function together. Light touches, playful pats, teasing smiles, and helping each other dress up—little things that are a different kind of language. However, we can feel a subtle rift, the monotonous boredom enveloping them. It’s there as they make decisions for dessert, it’s there when they argue over dinner, and the nervous flicker of looks as the concept of marriage is discussed. And it’s there when Ethan maneuvers Rome into a proposal stunt for their friends. It’s upsetting watching Rome’s disappointment as they head home. We later find out that the couple had already gone through a difficult time in the past due to Ethan’s cheating but has since been forgiven.

As the film goes on, we realize it’s not simply boredom; Ethan’s alone. There’s a desire to get out and roam, and Rome wishes to reach out and fill that rift. This is where the concept of an open relationship enters. Upon Ethan figuring out that their engaged friends Archie and Monique (played by Ivana Arawi and Vance Larena) are an open couple, he latches on the idea that it may be the solution to their already stale relationship.

This idea doesn’t come into play until the couple runs into Erika (Ina Raymundo), one of Ethan’s colleagues. Rome’s insecurity is in full display as Erika helps her with a dress, eagerly complimenting her figure. As Rome tries on the dress the other had recommended, she feels the need to measure up and excite Ethan, failing as soon as she realizes that Ethan requires something other than her. It’s this desperation that drives her to agree to the idea of an open relationship. 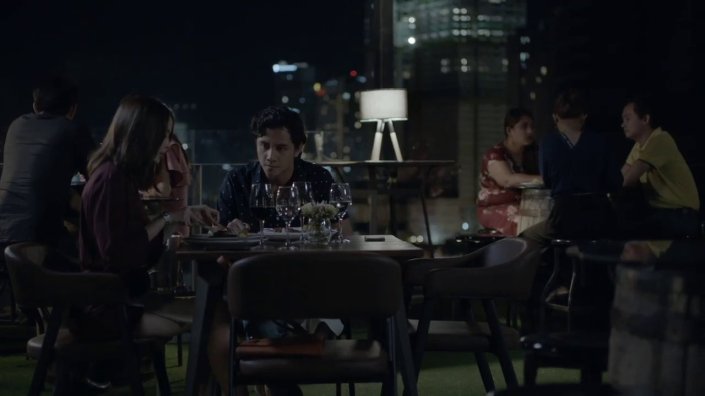 Open isn’t a film about salvaging a relationship, though there is a struggle towards it. It’s a film about discovering answers and how sometimes the answer is the strength to accept its dissolution. It’s a refreshing take on exploring a relationship on the verge of breaking; one that examines both sides of a failing relationship: one doing its best to adhere and the other aching to satiate an internal hunger that stems from insecurity. It is easy to roam knowing that someone is tethered to you, but to feed one’s ego using it is another story.

The film has such an impressive way of execution that doesn’t feel preachy in its message. It gives the viewer space to breathe and is sincere in delivering its resolution. Its dedication towards its earned ending for both characters doesn’t feel cheap, but natural and mature. There is an eagerness to embrace the path after, yet we wish Rome nothing more than the love she deserves and Ethan a lesson he’s yet to learn.

The screenplay, written by Dwein Baltazar (Oda sa Wala, Gusto Kita With All My Hypothalamus), Katherin Labayen (Just the Three of Us, Everyday I Love You), and Wanngo Gallaga (T’yanak, Sonata) is one of the film’s strongest points. There are a lot of things that could go wrong with it, but it easily manages to explore both Ethan and Rome as individual characters with their wants and needs as well as the inherent insecurity enveloping them as their own person and the need to push out of their boxes. But it also doesn’t demonize its characters. Erika for example manages to be a complex character that is tangled within our main couple. She manages to be a confident, lively character who refuses to be trapped in what could be the predictable trope of a third party.

Both Muñoz and Santos shine as the lead characters. There’s a palpable chemistry between them and Santos has the ability to make us sympathize (a bit) with his character, but it is Muñoz’s capability to express that repressed frustration and betrayal that surprised me. There’s great potential in her ability to release all the pent-up emotions—the anger, the sadness, and heartbreak all in one scene. Even Raymundo’s Erika is invigorating to watch as she tangles herself within our main characters.

In short, Open is a film about being hurt so bad that you have no other choice but to open yourself up to a new world away from that which you have tethered yourself into. It is embracing the journey towards rediscovery. It’s self-love and knowing what is good for you as you move optimistically forward, even with a broken heart.