Glenn Barit’s Cleaners opens with the last day of school, where 8 students—the assigned cleaners of the day—idly work all over the room. There’s a sense of boredom to the task, the short attention span of the teenage mind wandering over to the window, then to the nothingness of the ceilings and floors and each other.

The film is set during the tremulous shift towards the digital age. It was a global transition, with the rise of social media enhancing our experience with one another, along with the callbacks to MYX countdowns, CD players, Typecast’s iconic ‘Will You Ever Learn?’, the use of GMs (group messages sent through text that resembles today’s Twitter) and along with it, the chaotic mess of being a teenager.

Awarded as QCinema’s best picture this year, Cleaners offers something new at the coming-of-age genre. It basks in the usual nostalgia through its crisp photocopied appearance, allowing us to see all those rough edges, noise, and lines running through and all over. Its process did not come easy: it was digitally shot in 2 weeks, and its post-production consisted of printing more than 43,000 frames, finding the ugliest photocopier, photocopying each frame, and highlighting it. It’s a refreshing execution, one that reminds me of old 50’s films with its grainy texture. As the film unravels, I can feel time itself catch up to me.

Often, there’s a need to portray this specific period with a sense of romanticism, and while the film eventually does so, it doesn’t shy away from showing us the ridiculousness of our teenage antics and decisions. Its use of highlights helps punctuate each individual experience, showing us the extent of our influence towards each other as it creates a more vivid color against the rough edges of the pictures. 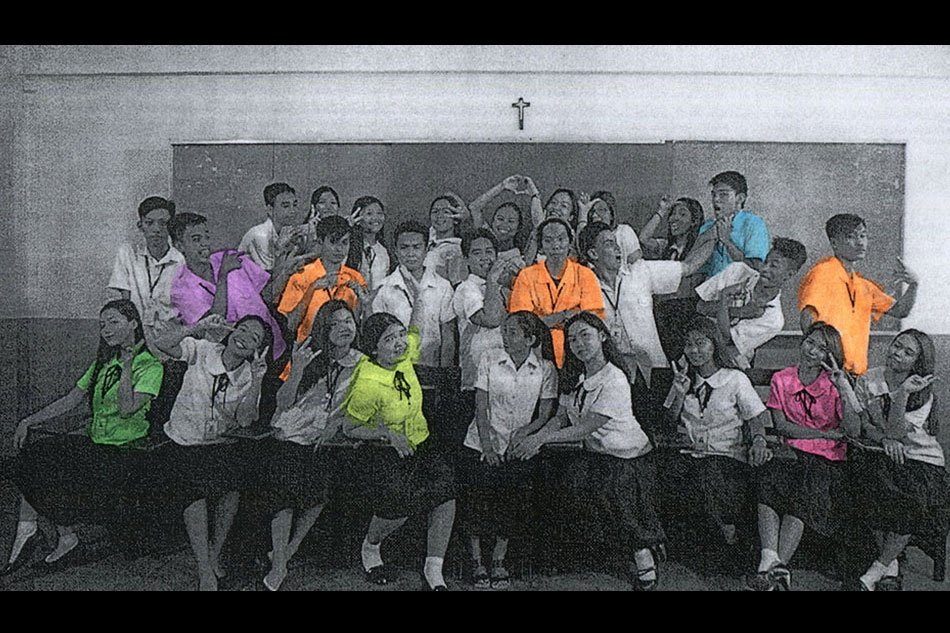 An anthology divided into five chapters, it explores the familiar themes of the isolation that comes with a humiliating public performance, the difficulties of cooperating in a group activity, the struggles of falling in love, and the pressure to uphold the family tradition. Each story unique in its own individual chapter in its moments of colored sequences.

Despite this, the story becomes quite loose by the last act upon getting all the characters together. There’s an apparent gap between each character that can only be filled by the tasks that are asked of them. We have come to know these children individually and the familiarity of their experiences but as evidenced by the last act, there’s a rift that alienates them from each other. One could say that it could be class (the could’ve been SK chairman of the town), body insecurities (the blue student struggling with his uncircumcised genitalia), societal pressures (the pink student dealing with an unwanted pregnancy), insecurity that comes from the trauma (the green dancer), or the struggle to belong (the class president and her emo classmates).

It’s interesting because these are the people we have crossed paths with, and while we can only do so much, it always starts with the recognition of that gap. The gap that comes with that need to exorcise the rage and bridging through it to create a new path for the better.

So, as the purple student sees this and screams out the window, there’s a collective realization amongst their fellow classmates that all these messes are far from over. Once it all sinks in, they all begin to unravel in a climax of teenage rage and laughter: the pain, frustration, and confusion of growing up. An echoed scream-laughter in-between, the first of the many more of their lives and the beginnings of it.

Cleaners is a film about such beginnings and a reminder that we are still here; exorcising that teenage rage of that specific period struggling in cleaning the messes of the past, finding all that which we can cope with, even if it means creating a bigger mess of our own. It’s a chaotic colored mess filled with remnants of those children we had now grown into and an optimistic promise of who they continue to become.